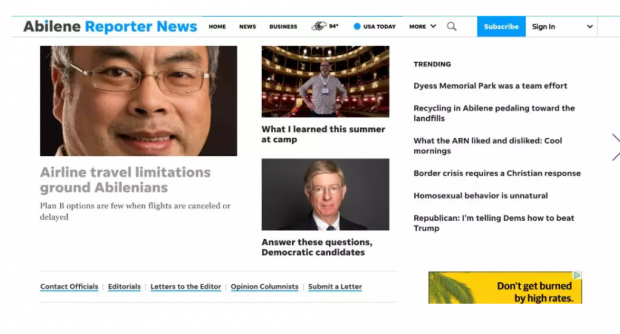 Abilene Reporter-News, July 27, 2019
Like many, we made a couple of trips out of Abilene this summer, once to New Orleans in June, and another time to Los Angeles in July.
These were vastly different trips, but they had something in common: Both involved delayed or canceled flights. When it happened in June, I, being not a frequent flyer, tried to shrug it off by thinking that it was one of those unfortunate events that we have to deal with every once in a while in life, just like getting droppings on our head when we walk.
In early July, I went with my kids to the airport, where we heard that the flight was canceled. I asked about the next flight and was told there would be no more flights that evening. We were advised to drive to Dallas to make the connection.
I immediately started to drive toward Dallas. When we were around 20 minutes from the airport, I checked the flight status while stopping at a gas station and found the connecting flight also was just canceled. We still went to the airport to check what our options would be, and we were relieved when American Airlines’ customer service put us on the next flight as “standby.”
What happened next was an unforgettable night and day as we were told to move from one gate to another in almost all terminals, or even twice or three times at a terminal. The standby list kept growing, as additional flights were canceled or delayed, reshuffling the waiting line, causing major anxiety among those who were waiting.
There were old couples there who behaved in a way that made me Google how to save someone in case of a heart attack.
When we missed the last flight at midnight, we were not offered hotel accommodation. We were told it was due to weather, not mechanical problems. We made a few calls trying to reserve something close by, without much luck. We ended up staying overnight at the airport.
The next morning, we again had to make trips to all of the DFW terminals, until American Airlines finally sent a new plane to accommodate the standby customers, whose list had grown to around 120. Then this flight, too, was delayed. Finally, we made it to the LAX Airport close to 24 hours later than scheduled.
During this time, AA customer service representatives showed no sympathy toward customers who had to cancel and rearrange hotels, meetings, presentations, tours, performances, and reunions that were possibly hard to coordinate in the first place. The financial and opportunity costs to all customers would have been astounding if added up, but it looked like the airline staff could not care less.
A number of friends shared similar experiences with me.
Some claimed that they had had more missed flights than timely ones. Some said they would choose to drive to Dallas for important travels. I realize there is now a pattern of delays, cancellations and missed connections. I understand that American Airlines might have woes of its own, such as dealing with grounded Boeing 787s and possibly wage negotiations that could have contributed to all these issues customers now face.
It does not help that Abilene is not served by an additional airline.
Monopoly corrupts. Abilene is a wonderful place to live, but transportation has become a major bottleneck for its growth. As the city is not close enough to DFW or any other major airports, a frequent traveler have to constantly choose between an exhausting drive and the risk of missing connections.
I used to wish for high-speed rails or average passenger trains; trains are usually more punctual for such distances. Trains are also less vulnerable to weather conditions or management issues. It is a distant dream as I do not see anything going on for high-speed rail plans even between busy metropolitan areas in spite of talks about it.
Some hope for an additional airline, such as Delta or Southwest. That would be wonderful, too, if deals can be made.
It will also be a good option to offer a direct Abilene-DFW shuttle or several Greyhound lines directly between Abilene and DFW. Currently, Greyhound stops in the center of Dallas, where you would have to find additional ways to travel to the airport; that could also be risky if the time is tight. Friends who tried it advised against it.
Abilene’s transportation simply lacks competition between airlines and diversification of transportation methods, which is not good for business in the city. I hope that the city can make it a high-priority item to bring in some change.
When first coming to Abilene, I heard that if we go to Heaven or the other place, we will first have to make a stop in Dallas via American Airlines. Fine.
But can we skip the purgatory of delays, cancellations, and epic list of standbys?
话题：